Around 2019 Facebook started releasing an update that prompted facebook users to create fundraising pages within Facebook. You may have seen the prompts yourself as it was a common occurance for people in our industry when sharing a public fundraising page on Facebook you would often experience prompts to also create a page within facebook itself.

Initially this was met with frustration in our industry since charities themselves really had no control over who setup pages and how they were managed and too often a fundraiser didn't really understand what it was that they were doing, they were often merely trying to share a page for an event that they had just signed up to and along came Facebook prompting them to create a second one, which many did, but the catch then was that anyone that donated to their Facebook page didn't get recognised on their "actual" fundraising page on the charity's site.

Additionally, for anyone actually wantingto create a facebook fundraising page it is a very manual process and one that exposes the fundraiser to numerous other charities whilst setting up their page, so it was almost a step backwards to how things were on shared platforms.

To counteract this Facebook released an API that allowed charities to control certain aspects of this and also get access to basic donation data made on Facebook so at least any donations received on Facebook could be reflected on their public facing page.

Setting up your Platform

When a fundraiser signs up to an event or creates a DIY page you can offer them the choice to then create a facebook fundraising page which acts like an extension of their online fundraising page.

This Facebook fundraising page can only be accessed from within Facebook itself, it isn't a public page so it's only visible to the fundraiser's facebook friends.

There are naturally a few limitations to the integration which it is important to know of.

Firstly, the donation data that we get back from Facebook is only the Amount, we don't get any personal details at all from donors donating to Facebook fundraising pages.

Secondly, since the transaction takes place in Facebook you wont get access to the transaction data in Funraisin nor will you be able to perform common tasks like refunds or reconciliation. That all must take place within Facebook.

In order to support Facebook Fundraising on your website you must first be registered for Facebook's Non-profit pages and you can find out more about that at https://socialimpact.facebook.com/charitable-giving/

If you already support the ability to accept donations on your Facebook page then you are half way there, if not then you will need to signup on the above link first before you can proceed.

Please keep in mind that verifying your business can take up to several weeks as you will have to provide specific information to Facebook and wait for their approvals which currently is taking longer than expected due to COVID.

Once you are verified the next step is to associate your website's Facebook APP with your Facebook page and this is quite straight forward to do.

Visit business.facebook.com to login to your business account and then navigate to Settings > More Business Settings then under Accounts > Apps  choose Connect an APP ID

Note: this will only work once your site is live

Once you have added your APP to your page this will send an alert to us to approve.

Setting up your Platform

Once approved we will enable Facebook Fundraising on your platform and you will then see some additional options when setting up online events or DIY fundraising themes.

For Events navigate to Fundraising Options from the middle nav when editing your event and you will see a Facebook Fundraising tab. 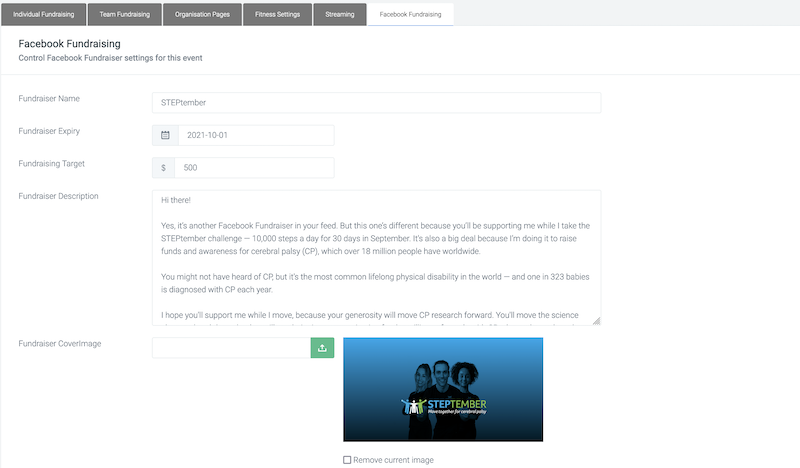 Once these are all in place any fundraiser taking part in your event will see an option on their fundraising dashboard allowing them to optionally create a Facebook Fundraiser.

Almost immediately after donations are made within Facebook to fundraisers they will appear in Funraisin with a donation type of "facebook", we will also create a Transaction record with a payment type of "facebook" for the amount that was donated via Facebook.

The only data we get access to is the amount and to whom the donation was donated to (the fundraiser), we don't get any payment information or personal information of the donor so any reconciliation will need to be handled from within your Facebook business manager account.